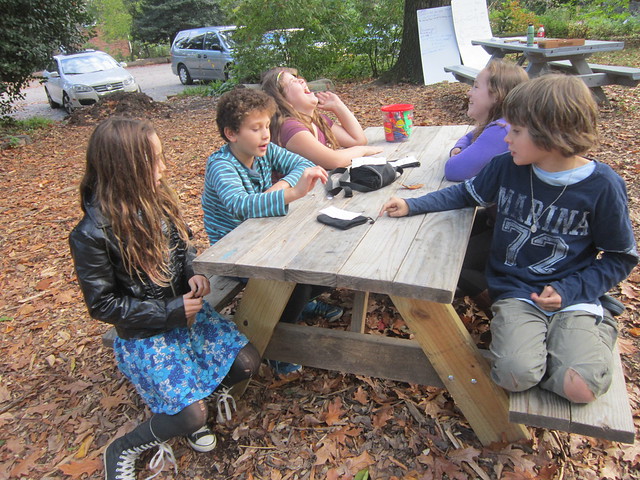 (October 21, 2014)  Last week’s boardwork was on display before the students arrived.  M, who was absent last week, was early for class today.  She saw the board and immediately asked, “Why does it say ‘die?’”

“Ask them,” I told her, indicating J and L, who were also early for class.  J set the board up for Life1. Then L explained the rules.

At one point I thought that some of her explanation needed clarifying, so I interjected with a one-sentence explanation.  “I think L is doing a fine job of explaining,” said J, politely shushing me.  She was quite right.  I needed to butt out.  (That annoying teachering instinct needed not butt in here.)

H arrived, announcing “I’ve been thinking about it all week and still can’t figure it out.”

“What are we trying to figure out?” asked M.

Before anyone could answer her, A joined the group and joined into the demonstration of the rules for M.

“But what is The Question?” asked M several times.  The kids explained that the goal is to see whether any initial patterns could generate ever-expanding life.  There was disagreement about how to investigate this.  A few kids wanted to take turns randomly setting up patterns and seeing what happens. We had done that for a while last week, until we realized (with a helpful suggestion from Gardner’s article) that a systematic approach starting with 1 creature might be good. (Gardner and Conway called them “counters.”  I’m trying to call them “creatures,” and the kids laugh when I mistakenly refer to them as counters, stones, etc.)

“Since we started to use this system last week,” I insisted, “let’s give it a chance, and if you don’t want to keep going with it, we can change our approach.”  (I had the calendar in the back of my mind – we only have one more session after today.)  So we did.  I kept track of the results on the board (see photo).  After about 20 minutes, though, several of the kids were bored with this approach.  Bored, or maybe frustrated.  They had tested 7 set-ups today, several more last week, and none had continued growing after 2 or 3 moves.  I think, though, that those 40 minutes of perseverance last week plus 20 today adds up to an hour of very impressive determination for kids of this age.  They have discovered that some set-ups lead to “death” (extinction), some to the “steady square” (AKA “block” as contemporary mathematicians describe this stable but non-growing position), and some to the “infinity turn.”  (AKA a “blinker” -  a type of “oscillator”).  But so far, none to continued growth.

BTW the kids love that in 1970 Conway offered, via Gardner, a $50 prize to the first person to prove or disprove the conjecture that “no pattern can grow without limit.”  “Fifty dollars was a lot of money back in 1970,” the kids enjoy declaring.  They also have enjoyed naming the end result of each set-up.

I will be the first to admit that this extremely systematic approach to the problem does get tedious.  (These days, this type of problem is done on a computer.)  It probably would have been more fun to randomly try different arrangements/numbers of counters until a kid-directed systematic approach had emerged.  Creating the set-ups from imagination versus a rule is definitely more exciting.  At this point in class, two of the kids were engaged in non-math conversation, two were highly engaged in playing Life, and one was splitting her attention between these activities.2

“I think we’re ready to put our attention on something else,” I proposed.

“I know you’re not,” I said sympathetically.  “I know that you could work on this problem all day long.”

“Let’s try to come back to it later today if we have time.”

So, we moved on.  At this point, we have 2 working conjectures about Life:

The group is divided in their support for the conjectures.

MURDER AT THE SKI RESORT

A few kids were a bit antsy, so I moved the group to a different table, where I read them one of Gardner’s “Tricky Mysteries.”

“A Chicago lawyer and his wife went to Switzerland for a vacation.  While they were skiing in the Alps, the wife skidded over a precipice and was killed.  Back in Chicago an airline clerk read about the accident and immediately phoned the police.  The lawyer was arrested and tried for murder.

The clerk did not know the lawyer or his wife.  Nothing he’d heard or seen made him suspect foul play until he read about the accident in the paper.  Why did he call the police?”

Finally, L, A, J, and M agreed on an answer: “The clerk was familiar with the precipice, and knew that it wasn’t a dangerous place.  Therefore the husband must have done something intentionally to make it dangerous.  He pushed aside and piled up the snow to make her fall over the edge.  Something in the newspaper article revealed specific info about the precipice, raising the clerk’s suspicions.”  (This is a semi-paraphrase.)

“How could you push aside that much snow?” demanded H of the other 4.  They came up with an answer that satisfied his objection.  Consensus.  Then they looked at me.
“We came up with a solution,” declared M.  At their request, I re-read the problem, and they agreed that nothing in their solution contradicted it.  Triumph!

“What does Gardner say the answer is?” asked L.

“Do you mean to ask what he says ‘an’ answer is?” I retorted.

“I mean, what does he think the answer is?”

I read to them his explanation:  “The clerk had sold the lawyer a round-trip ticket to Switzerland, and a one-way ticket for his wife.”

“Round-trip!” exclaimed J, as she jumped out of her seat.  “That is so good!”  She loved Gardner’s explanation.  Everyone else was frowning.
“That’s it?” several asked.

“Let me explain to you how round-trip tickets work,” said J to the group.  She thought (and was probably right) that not everyone saw the implications of this.  She explained, but no one was impressed.

“There could be many reasons that they weren’t planning to travel home together,” suggested several people.  The kids discussed this amongst themselves.  They decided that Gardner’s “answer” left a lot to be desired.  I generalized for them the power of their logic – how causal assumptions can be knocked down/weakened with alternative explanations.  (The causal assumption here was the clerk’s, and possibly the police’s, assumption that if the couple went to Switzerland on vacation together that then they would/should return together.)  The kids did not accept that assumption, and therefore Gardner’s solution.

“Ours is better,” declared M with an emphatic nod.  Everyone else nodded too.  Even J was convinced.

I was, of course, thrilled that these kids were so willing to find fault with the findings of so renowned a mathematician.  The open-mindedness of kids is so inspiring to me.  My (boring) adult mind, of course, is clouded by Gardner’s accomplishments and reputation.  I don’t even think I would ever fathom coming up with an alternative solution to one of his problems, even though I know people did all the time.  That was one of the big points of his column in Scientific American – that plain old regular people like us might have a better idea than he did about how to solve a problem.  The kids love this about him, and so do I, even though I still feel intimidated.

“I know the answer!  Please, please, please let me say it!”  begged J right from the start.  (Reminiscent of Arnold Horshack on “Welcome Back Kotter.”  I knew that she knew a valid solution because when we first attempted this problem 2 weeks ago, she saw the solution almost immediately and blurted it out before I could stop her.  Fortunately last time, most of the kids were still trying to understand the question when she explained it.  Therefore no one knew what she was talking about.

But now everyone understood the problem.  On the one hand, I wanted her to be able to explain it because she is a kid who likes to think long and hard about problems and often becomes anxious when others posit conjectures before her.  OTOH, I wanted everyone to have a chance to figure it out.  It’s so much fun to think about.  Also, L and A were straining in their seats with conjectures as well.

“I see you have an idea of what the solution might be, but so do some others.  Let’s make sure everyone gets a chance to state their conjectures.”
“Let’s raise hands,” suggested someone.
“Good idea,” said someone else.

“If that’s okay with the rest of you, I’ll let J go first and everyone will get a chance.”  The others agreed, as they could sense her urgency above all others’.   Most of the kids raised their hands, so I went around the table asking everyone for their conjectures:

(NOTE:  THIS PART IS A SPOILER SO DON’T READ THE PART IN INTALICS IF YOU WANT TO TRY TO SOLVE THE PROBLEM YOURSELF.  ALSO, FYI, I AM PARAPHRASING THE KIDS HERE.  THESE ARE NOT QUOTES.)

J – If you pick a random marble out of the box labeled BW first, you can figure them all out from one because…

A – I can’t remember (In his generosity in allowing J to go first, he had lost his train of thought.  Once again, we see how a common frustration in mathematics is the fleeting nature of initial insights.  Now you see it, now you don’t.  It’s helpful to students when we acknowledge this.)

H – I want to see it.  We could use items from the Life/Go set as props.

So we dramatized it and confirmed both conjectures above.  Everyone was satisfied and it was time to go home.
See you all next week, for our last session!
Rodi

2 One challenge in this math circle is that the kids REALLY like each other, but a few only see each other for this one hour per week.  Their desire for social interaction is VERY high.

3 “Imagine that you have three boxes:  one containing two black marbles, one containing two white marbles, and the third, one black marble and one white marble.  The boxes were labeled for their contents – BB, WW and BW – but someone has switched the labels so that every box is now incorrectly labeled.  You are allowed to take one marble at a time out of any box, without looking inside, and by this process of sampling you are to determine the contents of all three boxes.  What is the smallest number of drawings needed to do this?”  My Best Mathematical and Logic Puzzles, p3