This week we started out our Rube Goldberg Workshop with a game and introductions, including what each person likes to make. Asha gave a short history of Rube Goldberg, talked about how he went to school to be an engineer, but his passion was drawing cartoons, so he followed his heart and went to work for newspapers. We discussed the fact that he never actually built his machines, just drew them. A couple of books of Rube Goldberg drawings were passed around for everyone to see his actual contraptions. 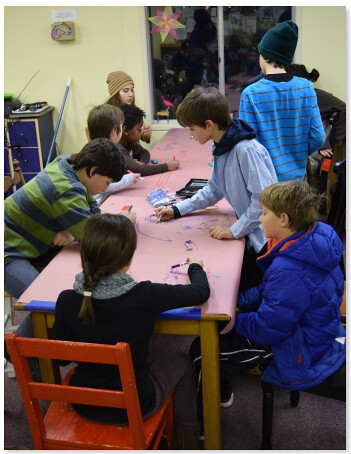 The next part of the workshop was watching a few videos of Rube Goldberg contraptions. We started with some very complicated ones, seeing what can be done with a big crew and a big budget. We ended with a video of a machine that was built in a garage with common things from around the house.

Steve brought in a few things showing simple machines and how they work. The first was a router contraption that worked with pulleys and springs and a crank handle. It was just sitting there, and caught A’s eye, he wanted to examine it, so we all started looking at it, discussing what it did, how it worked.

Then we moved on to investigating the drawer from a DVD player, which had been removed from the machine. The workings were exposed so they could see the gears and pulleys inside. They could hook it up to a battery to make it slide in and out. Sometimes it would jam and get stuck so they figured out how to get it going again. 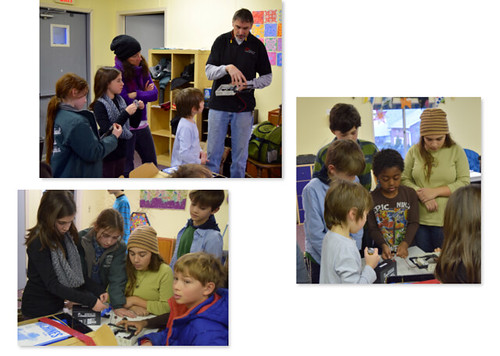 The simple machine that we focused on the most this week was the pulley. Steve had several pulleys and rope for experimenting with. He talked about building the Hoover Dam, how they used pulleys to move the materials out over the river. 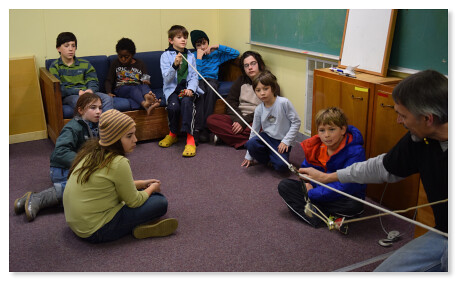 After watching the videos, M started with dominoes, string, paper and duct tape, and made a little contraption. He requested everyone watch him set it off, which inspired others and soon there was a mix of people making there own little runs, and groups working together on cooperative efforts. Frustration happened with dominoes falling over too soon, and people having ideas they wanted to make happen and others not cooperating. They worked on figuring out how to get things balanced just right so the contraptions would work. 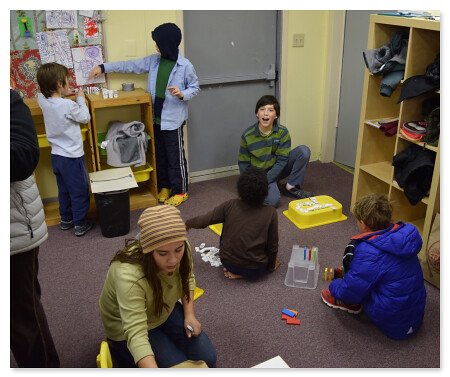 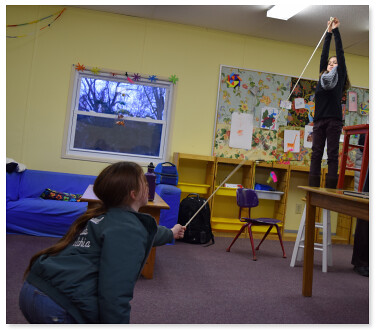 It was interesting to watch what of the various things around the room attracted different people. M and J played with a pulley on a rope. D was particularly interested in the DVD drawer and battery. Several were working with dominoes and other items to make little machines. 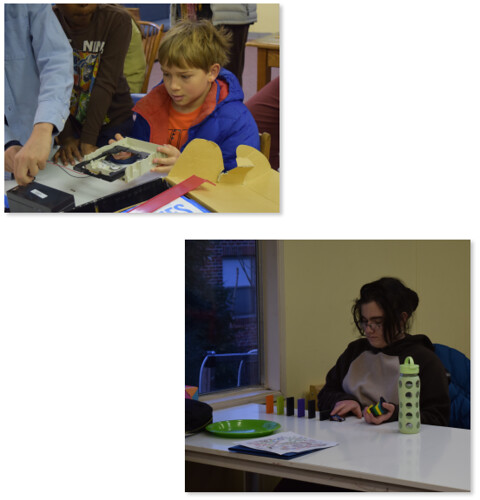 The last thing we did was roll out a long sheet of paper and all the young people sat around it and drew their own part of a Rube Goldberg Machine. All the parts connected to the next person’s down the table. There was a lot of imagination planning each part and how it would work with the next section of the machine. Finally each person described their part of the machine and it’s steps. Some of the joy in a paper machine is that it doesn’t have to follow the laws of physics and always works.

Week one was a fun overview of Rube Goldberg Contraptions and I think everyone is inspired to get to building our machine. 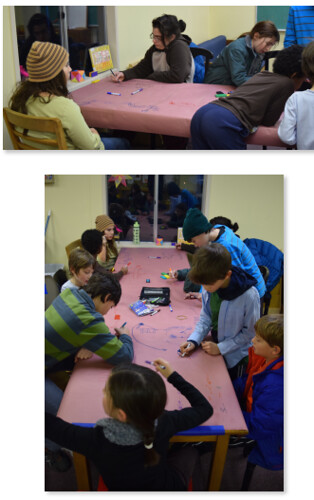