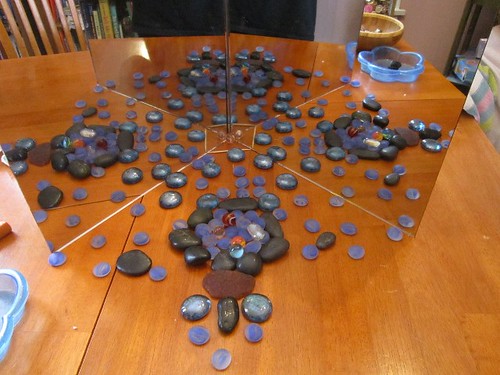 Before there was Vi Hart, there was Martin Gardner.  Celebrate the Martin Gardner Centennial with an exploration of Recreational Mathematics.  For 25 years, Gardner wrote the Mathematical Games column in Scientific American, and became legendary for his unconventional approach to mathematics.  In this circle, we will explore his life, his influence, and of course, his mathematical puzzles.  The goal of this math circle is the same as the goal for all of them:  to develop mathematical thinking.  Recreational mathematics is yet another avenue for seeking patterns when none are obvious, and for seeking ways to crush seemingly obvious patterns that aren’t really patterns at all.

We’ll explore the idea of infinity using drama (puppets!) and embodied mathematics.  The kids will use their imaginations and physical movements to play with patterns that have limits and patterns that don’t.  And we’ll work on verbalizing our mathematical ideas as we try to figure out what patterns exactly are.

Recommended Ages 11 and up

In this math-meets-art circle, students will experiment with the four types of symmetry in a plane to create their own tessellations (tilings).  We’ll look at the work of MC Escher and that of the mathematician whose work inspired Escher, George Polya.  We’ll draw and draw and draw.  We’ll also attempt to determine which regular polygons can tessellate a plane, and then verify our answer with proof.

CHROMATIC NUMBER OF THE PLANE

Students will explore graph-coloring questions and tilings to lead up to an exploration of an open (unanswered) question in mathematics: the Chromatic Number of the Plane (aka The Hadwiger-Nelson Problem).  But my real agenda here, as it is in just about every math circle, is to move children toward abstraction.  We’ll start out by using manipulatives and then hopefully wean from those to explore the difference between objects and symbols and, more generally, the difference between things (the concrete) and ideas (the abstract).

*NOTE:  If the Carver Elementary Science Fair is scheduled on one of these Tuesdays, we will not have class that day, and add on a session at the end (4/7).

Did you know that just as classical composers incorporate variations on themes in their compositions, mathematicians create them in their work?  Isopmorphic problems appear dissimilar on the surface, but have the same underlying structure.  We’ll try out some traditional river-crossing problems, and see if we can solve them.  Then we’ll try some problems that are not about crossing a river, and compare and contrast them.   Finally we’ll try to create our own isomorphs.  (BTW I’m not telling the kids whether any of these problems are related; let’s see if they figure that out for themselves.)

If you have a teen or several, and are interested in a teen math circle, let us know.  We can connect you with other interested families, and if there are enough people with similar schedules, we can put a course together.