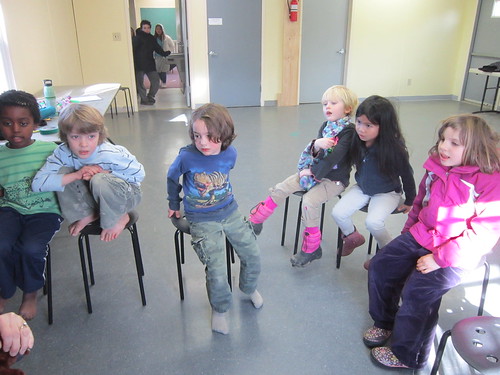 (March 18, 2014)  When I arrived for today’s session, some of the 5-year-olds were already there, bounding with excitement having spied on their older siblings in Math Circle over the past few years.  Now it was their turn, and they were owning it already.  They chose the room, chose the chairs, set up the chairs, rearranged furniture, helped me make a “12 clock” on the floor, and banned older siblings.  The other fives arrived, and we were ready to start.

“If you were to count by ones around this clock,” I asked, pointing to the clock on the board, “would you end up jumping on every number?”  Most said yes.  A few said no.  So we went to the big clock on the floor and jumped it - jumped it in rhythm, each child on a different number at the same time, reciting that number.  They returned to their seats and agreed that yes, they had jumped on every number.    We traced the jumping pattern on the clock on the board.

“What If you were to count by twos.  Would you jump on every number?”  Kids started to jump out of their seats to try, but I said, “Wait a minute.  Let’s make a prediction first.  In math, we like to try to predict answers before figuring things out.”  Now there was some dissent – some kids thought yes, and some no.  I wanted to be sure that everyone knew how to count by twos, so we did it all together in rhythm with me conducting them in 4/4 time, probably the first time since high school music theory class that I’ve done this in public.

Once jumping on the floor clock, the students found the two pattern trickier to navigate.  The numerals were spaced too far apart to easily skip over one, plus we had 6 kids on 12 numerals, requiring some jumping over/around people.  But they figured it out, returned to their seats, and reported that no, you don’t get every number when you count by twos.  We marked that pattern on the board clock too.

“What if you count by twos, but start on the number 3.  Would you jump on every number?”

“You can’t do it like that,” was the general response.  Seems that in their realm three wasn’t a possible starting point.  No one even wanted to try, they were that convinced.

“If someone tells me that something is impossible, that makes me really want to try it.  Come on, let’s try.”  So this well-mannered group cooperatively went over to try this impossible task.  Just then, I needed to step out of the group to consult with a parent for a few minutes.   I could hear the kids jumping and counting, though, as I was engaged in something else.  “It looks like you ARE doing it,” I said to the group when I returned.  They excitedly agreed that you could actually do this.

Things got tricky when I asked for help tracing the pattern that we just jumped on the board.  The students dictated their moves to me, and I put it up there with a new color of chalk.  We ended up with  two hexagons superimposed (one for starting on 2 and one for starting on 3).  I recapped in a questioning tone, “So it looks like you can jump the clock counting by twos, and start from either two or three, right?  And with both ways, you cannot get every number?”  These were two complex ideas, represented abstractly on the board, and I was foolish enough to ask both questions at once.  Or maybe I was just too excited.  Either way, most kids were thoroughly confused.  So we counted again, using the board, until everyone understood.

We could have continued clock jumping all day, but I wanted to do some other activities too.  I introduced them to my puppets Waggy and Penelope, who joined the puppet Baby Puppy, who had been involved in the counting activity.  I explained that I want to tell them a story with Waggy and Penelope, both actors, playing parts.  The parts were princess, prince, and king.  The students decided that Waggy should play both the prince and the king, a huge challenge for the puppeteer.  I proceeded to tell a logic story1 in which the prince somehow uses logic to save his life.  I explained everything, except how he did it.  “How did it end?” asked L.

“That’s for you to figure out,” I replied.

“That’s for you to figure out,” I replied again.  Some very excellent conjectures came from all of the students.  Unfortunately, none of those ideas worked.   M’s idea was that the princes reveal the king as a cheater.  That’s when I said “Oh no, your idea reminds me that I forgot to tell you the name of this story.  It’s called A Very Clever Prince.”  We discussed how it would not be very clever to call a king a cheater (in that time/place), and how, had M known the name of the story, she might not have proposed that idea.  She was beside herself with glee about how funny it was that the name of the story revealed so much and that my forgetting it changed so much.  (In Math Circles we intentionally pose vague, poorly-worded questions to generate question-asking.)

“What if we can’t figure this out, will you tell us the answer?” asked, almost begged, someone.  I promised to give a hint in week 4 if they needed it by then.  Then we took a break from logic so that I could show them Waggy’s favorite game:  Function Machines.

“That’s not what a hundred and one looks like,” said someone, who came up to the board, took the chalk from me, and wrote 1001 to correct me.

“No,” said someone else, “Rodi  wrote it correctly.  You wrote a thousand and one.”  I stayed out of the debate, which remained unresolved, and then promised to address how to write numbers in a future session if there’s time.  [Note to self and parents:  if we get to this, which we probably won’t since place value is a huge topic, I would address it by playing Exploding Dots.  You may want to try this at home on your own for curious kids.]

We returned to the function machine.  N said to put in “sixty thousand ten hundred million,” or something like that.  I dramatically struggled at the board with how to write this number.  N came up, took the chalk, and showed me how it was done.   You could hear a pin drop while he worked.  Everyone sat quietly, for what seemed like close to eternity, but was probably about a minute.  His back was blocking his work, he and I were debating the name and appearance of the number, and no one said a word or moved.  (I doubt eight-year-olds would have tolerated that!)

His written form of the number differed from mine.  Which was correct?  I said that writing numbers is like a language, and that my version reflects the conventional language that mathematicians here and now use, but that other languages of numbers are possible.

My number differed from his in several ways – the number of digits, the order of the digits, and the fact that mine had funny little symbols in them that the students found hilarious in that they looked like bananas.  I explained that mathematicians use bananas/commas to make the numbers easier to read and understand.

FUNCTION MACHINE – WHAT IT DOES

“What is this machine doing to the numbers?” I then asked.  No one could say beyond “crunching them up and changing them.”  We did more examples, putting in 2, 3, 8, 12, and 4.  Every time, the students could accurately predict what came out from these “in” numbers, but no one could say why.

“Is the machine doing the same thing each time?” I asked.  A number of the students said no.   “But if it’s doing something different each time, how are you able to predict the out numbers?”  I could almost see the wheels turning in their heads.

“That’s how it goes,” they said.  They patiently explained to me that numbers go in a certain order, and that by knowing the order, you could know what comes next.

“But why does 13 come after 12?”  I asked in apparent Greek.  It just does, they said.  Ours is not to reason why, ours is but to do or die.  Oh wait, that’s what Tennyson2 said, not what the kids said.    And unlike the British soldiers, our group was starting to question why.  I could see the beginnings of perplexity form on their faces.

Someone posited the conjecture that 13 was bigger than 12.  Someone else added that as you go up, numbers get bigger, and as you go down, they get smaller.  M disagreed with this.  Her conjecture was that while yes, 13 comes after 12, provable by reciting the numbers in order, 13 actually might be smaller than 12.

“How can we be sure?”  I can’t believe how the mathematical thinking was heating up here.  Students were stymied about how to prove this, but more importantly, they were seeing the need for proof!  This is so big in math that I should have written The Need for Proof.  Instead of getting sidetracked by a proof here, though, we decided to accept on faith that 13 is bigger than 12 in order to push the mathematics forward.  We tabled this proof, but will come back to it.  Another big piece of mathematical thinking:  Making An Assumption In Order To Push The Mathematics Forward.  We didn’t actually move forward from this point, though, because we were out of time.

I asked the students to remove the tape clock numbers from the floor.  A and E worked hard to remember their assigned numbers and remove the correct ones, but I made a mistake when I repeated.  I will be more careful about this, and about giving everyone promised turns with the chalk, next time.

As the young ones exited, some of their older siblings, who had been spying on the class,3 rushed in to get a recap, and, I suspect, to make sure I hadn’t betrayed any of the mathematical adventures I had with the older ones and puppets last year.  (Don’t worry, I didn’t.)

Special thanks to Bob Kaplan for the clock-arithmetic activity and to Asha Larsen for photography.

PS  Please indulge me as I use this space to promote the Math Circle Raffle Basket that will be offered at the Talking Stick/Awbury Arboretum Inagural 5K Walk on Saturday, March 29.  With help from others, I’ve put together a hopefully-delectable basket of mathematical goodies:

What is the Name of This Book:  The Riddle of Dracula and Other Logical Puzzles (Raymond Smullyan)

A Beginner’s Guide to Constructing the Universe:  The Mathematical Archetypes of Nature, Art, and Science (Michael Schneider)

Princeton University Press Mathematics 2014 (if you think math is just arithmetic, peruse this catalog to see what topics mathematicians are currently exploring)

Slinky (visit here to explore the calculus behind its motion http://danielwalsh.tumblr.com/post/11566016253/explaining-an-astonishing-slinky)

Silly putty (use it on the newspaper comics to explore reflection)

*THANK YOU to Maria Droujkova, Gina Gruenberg, and Dale Beshore (of The Princeton Review) for your generous donations to this basket