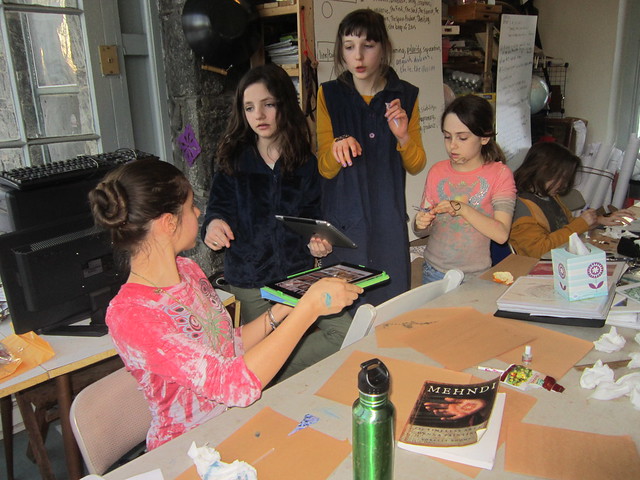 Good question.  Since both of these comments were from folks who’ve been very supportive of our math circle, I knew that I had some serious thinking to do.  For those of you who are interested, I’d like to address (and put my own spin on) these comments after I report on what we did this week:

Math Tidbits from this Week

Our group continues to dwell on the well-drawn circle.  No one has yet mathematically defined the circle, but we all know it when we see it.  We’ve been using compasses and studying/discussing various drawings of circles, so much to the point that the circle may be The Topic of this entire course.  Today the kids were surprised and impressed by one I drew freehand on the whiteboard.  I compared it to another circle (done with brushstrokes1), asking which of these were sacred, if any.  The kids discussed, and concluded that sacredness can be found in either the intentions of the object’s creator or its viewer – it all depends on what you’re using it for.  This fascination with contemplating circles reminds me of a Plato quote that I read to the kids early on:  “There is a faculty of the mind of each of us which these studies purify and rekindle after it has been ruined and blinded by other pursuits.”1.5  (I do find the second part of that quote rather extreme, but it is intriguing.)

We revisited the Olympic Rings – their history, compass-construction geometry, and significance.  This conversation led us to a debate about whether various images I presented were symbols, icons, or logos.  I mentioned that I had always wanted to come up with a logo for the Talking Stick Math Circle, and that I’d like for it to incorporate the flower of life somehow.  One student got right to work on that.

The kids collaboratively figured out how to draw a triangle with a compass and “straightedge,” and how to extend the triangles.  (I put straightedge in quotes, because most people were using compasses for the circles but freehanding the lines.)  I gave a few requested hints about how to construct the flower of life to those who were interested.2

We also discussed where geometric shapes came from originally.  We studied some images from Schneider’s book.3 Controversy emerged over his sketches of and statements about the three-cornered structure of various fruits, vegetables, flowers, and insects.  The kids disagreed about the geometric structure of some of these, and whether one even existed.  “If you have to assign a shape,” one student finally conceded about the butterfly, “then I guess it resembles a triangle.”  This student was our dogged rationalist from 2 weeks ago; she once again dismissed empirical evidence (the sketches) to question an underlying assumption (Must a shape be assigned?  Are we assuming meaning and structure where there might be none?).

Her comment led to a very brief discussion of where did geometric shapes even come from?  How did people first get the idea to draw them?  That conversation will have to be continued, as we were out of time.

Art Tidbits from this Week

Gina brought in some washable colored body paints to accent students henna designs, or to use instead of henna for those whose extracurricular activities forbid visible skin art.

Some students sketched on paper, while others went right to skin.  Gina pointed out many of the students’ designs began with the circle and radiated outward with some symmetry or pattern.

One student worked on designing and testing a compass that could apply henna.  Another assisted in preparing the colored body paint.  Some searched for design inspiration online.  Whatever they were doing, it was noticeable that the students continue to become more collaborative – trusting each other more in applying henna to each other, and discussing both the art and math with each other.

The emails above have prompted me to look at this math circle with what, in the contemplative tradition, is known as the beginner’s mind.

Since we’re six weeks into an 8-week session, I’ll start by thinking out loud, so to speak, about what we’ve accomplished so far.  We’ve discussed math history, math philosophy, applied math, mathematical thinking, contemplative mathematics, and math as collaboration.  And, of course, we’ve explored and discovered some theoretical mathematical concepts.  I hope that the course may be fostering an appreciation of mathematics, as at least one student came into the course in saying “I hate math.”

But this class is not just math, it is a math and art course.  There are times, such as last week, when we seem to be doing only art.  I’m hoping that those times are still pushing the mathematics forward.  Here’s what I’ve been wondering: Does doing art influence a student’s math learning?4

I’m also wondering how to evaluate whether a circle successful.  We are probably spending more time (although maybe not more effort) on henna than math.  Also, is applying the henna such a powerful contemplative activity that it activates peoples’ brains for other types of exploration/learning?

Have the geometric discoveries of the past 6 weeks occurred because of student interest?  Plenty of research shows that long-term learning is more likely to occur when the learnee is motivated by interest.  I remember a classic example of this from my grad-school course work: gardening.  When you decide to build a garden, you only need to read the instructions once.  You don’t need to review, make flashcards, and quiz yourself on your gardening studies before you go out into the dirt with your trowel.  And isn’t it some weird meta-cognitive-psychology that I have always been so interested in cognitive psychology that I still vividly remember this gardening example 20 years later?

Will these kids remember the properties of a circle in 20 years?  If so, might it be because they discovered them for themselves?

My answer to all these questions is that I hope so.  None of this stuff is supposed to be dogma, just questions.

Why do I write these reports week after week?

A few more Questions about this Math/Henna class

I do so appreciate feedback from you parents and math circle leaders who read these reports.  I encourage you to post comments on the website, so it could be a group discussion.

We will be doing a student and parent evaluation at the end of the course that may shed some more insight.

Here’s an extra-big thank you to the senders of those interesting emails, who set my brain on fire.  And thanks to all of you who read this long reflection.

1  I showed the back cover of the book Gina brought in:  Zen Brushwork:  Focusing the Mind with Calligraphy and Painting

2 Email me if you’d like step-by-step instructions on how to do this if your child is struggling with this at home.  I used the phrase “for those who are interested” because the students are pursuing different tasks, even though all are engaged in a group conversation throughout the class.

3 Michael Schneider, A Beginner’s Guide to Constructing the Universe:  The Mathematical Archetypes of Nature, Art, and Science.  p48-49

4 This is certainly not a new question or idea.  For instance, a teacher in the public school down the street does project-based math with eighth graders.  Every year she teaches geometry by instructing her students to design, build, and decorate birdhouses.

6 Oy, do I dislike this piece of educational jargon, but if the shoe fits, wear it, right?